Prof. Dai is broadly interested in astrophysics and cosmology. Through both theoretical investigation efforts and data analysis, he is interested in gravitationally magnified celestial sources in distant galaxies behind galaxy or galaxy cluster lenses. Through gravitational magnification, his group search and study extremely magnified individual supergiant stars and young star clusters in the young Universe, in order to understand their physical and chemical properties and their feedback on the surrounding interstellar medium. His group also exploit highly magnified sources as a sensitive probe of clumpy structures of astrophysical dark matter on scales smaller than galaxy formation, and aim to understand the microscope nature of the dark matter. Prof. Dai works together with astronomers elsewhere who collect data from the Hubble Space Telescope, the new James Webb Space Telescope, and other ground-based facilities.

Prof. Dai is also interested in novel methodologies to search for imprints of New Physics in the Cosmic Microwave Background (CMB), which can inform us about the physics of the primordial Universe. Most recently, his group studies the so-called cosmic birefringence effect on the polarization anisotropies of the CMB as a sensitive probe of cosmic strings, which are stringy topological defects in an axion-like quantum field that might have formed from a phase transition in the early Universe.

Prof. Dai received a B.S. in Physics from Peking University in 2011. Later on, he earned his Ph.D. in Physics from the Johns Hopkins University in 2015 working on theoretical cosmology. From 2015 to 2018, he was awarded an NASA Einstein fellowship and was appointed a postdoctoral Member at the Institute for Advanced Study in the School of Natural Sciences. From 2018 to 2020, he was a long-term John Bahcall postdoctoral fellow at the Institute for Advanced Study, before he joined the faculty in the Department of Physics at the University of California, Berkeley. 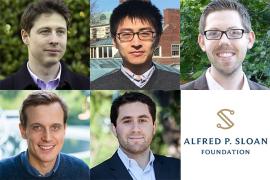 Five UC Berkeley assistant professors have been awarded 2021 Sloan Research Fellowships, which are one of the most competitive and prestigious awards available to early career researchers.
Loading Class list ...
.