Kristina Hill is a professor in the Department of Landscape Architecture & Environmental Planning.  She studies changes in environmental conditions as a result of urbanization and climate change, and develops urban design approaches, infrastructure strategies, and habitat conservation strategies that allow coastal regions to adapt to increased extent or frequency of flooding. In her work, she partners with local communities and government agencies. Most of her current partners are in the San Francisco Bay Area, but she has also recently worked in Denmark, coastal Virginia, and New Zealand. She has made it a priority to work with low-income communities and communities of color, because they are often disproportionately impacted by sea level rise. She is a member of the State of California's Sea Level Rise Task Force. 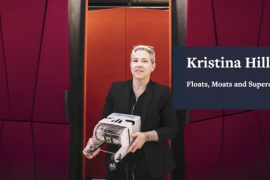 Since we don’t yet know how fast and how high sea levels are going to rise because of climate change, our strategies must be ready and adaptive as conditions change, according to UC Berkeley urban designer Kristina Hill.

Since we don’t yet know how fast and how high sea levels are going to rise because of climate change, our strategies must be ready and adaptive as conditions change, according to UC Berkeley urban designer Kristina Hill.

Please note: The views and opinions expressed in these articles are those of the authors and do not necessarily reflect the official policy or positions of UC Berkeley.
February 11, 2020

Los Angeles Times
Rosanna Xia
As if the threat of rising seas weren't enough for the Bay Area and California, with more than $150 billion worth of property at risk of flooding by 2100, the problem is compounded by the attendant risk of groundwater flooding as the ocean moves inland. It's the "sea beneath us," some researchers say, and it won't be held back by levees. Associate landscape architecture and environmental planning and urban design professor Kristina Hill has focused her research on this lesser-known aspect of rising sea levels, and she explains that pressure from the rising ocean pushes freshwater up from underground. It will make basements and foundations heave, corrode sewer pipes, and bring up and spread buried contaminants. "We could spend hundreds of billions of dollars and still have flooding on the inland side of all those levees," she told the state Assembly's Select Committee on Sea Level Rise and the California Economy last week. She showed a map of areas where water is already surfacing. "We're very concerned about human health and the health of the bay," she said.
FullStory (*requires registration)

The Sea Beneath Us

Bay Nature Magazine
Grace Mitchell Tada
It's not just rising sea levels that will inundate the San Francisco Bay and other coastal areas of the U.S. as a consequence of climate change; groundwater levels will also rise. Landscape architecture and environmental planning and urban design professor Kristina Hill is a pioneering researcher on rising groundwater levels, and one of her students, landscape architecture and environmental planning student Grace Mitchell Tada, describes Professor Hill's findings in this article. "In a nutshell, as a warming climate raises sea levels, the sea won't only move inland, flooding low-lying land near the shore; it may also push water up from beneath our feet," she says. And, as Professor Hill pointed out on a field trip with her students, the scenarios could include such nightmares as water leaching inside homes, toilets chronically backing up, sewage seeping through manholes, the spread of contaminants buried in the soil, and worse. Civil and environmental engineering professor Mark Stacey highlights another problem: the seawalls erected by local cities to protect against rising sea levels could alter tidal amplification, further raising water levels in the Bay and potentially exacerbating flooding in other areas. For more on Professor Hill's research, see this story at Berkeley News from November, and this video from 2017.
FullStory