Kaoru Saijo is an assistant professor in molecular & cell biology at UC Berkeley.  The goal of her research is to understand the molecular mechanisms behind how microglial cells, resident immune cells in the central nervous system, maintain homeostasis in the brain and to explore using nuclear receptor (NR)-mediated transcriptional and epigenetic regulation to restore normal microglial functions in animal models of neurological diseases. Her team takes an interdisciplinary approach to our research, employing concepts and techniques from the fields of immunology, neurobiology, endocrinology and molecular biology.

The projects in our lab are focused on understanding neurodevelopmental, neuropsychiatric and neurodegenerative diseases such as autism spectrum disorder, major depressive disorder, Parkinson’s disease and Alzheimer’s disease. We are particularly interested in these diseases because they exhibit two critical components: deregulation of immune responses and sex dimorphisms. More specifically, we study how sex hormone NRs, such as estrogen receptor (ERα and ERβ) and androgen receptor (AR), mediate transcriptional and epigenetic changes in microglia that regulate overall immune responses in the brain. Through the use of mouse models, we hope to develop novel, NR-based therapeutic strategies for the treatment of neurological diseases.

PD is one of the most common age-dependent neurodegenerative diseases and is characterized by tremors, bradykinesia and rigidity. The hallmarks of PD pathology are the loss of dopaminergic neurons in the substantia nigra, accumulation of intracellular protein aggregates (Lewy bodies), and inflammation. Interestingly, polymorphisms of ERβ and interleukin (IL)-6 are known to associate with increased risks of PD. Our results have shown that a subset of androgens can function as endogenous ERb ligands, resulting in the repression of pro-inflammatory mediators, including IL-6, IL-1b, and iNOS. Therefore, we hypothesize that aging impairs the production of anti-inflammatory ERβ ligands in microglia and that the subsequent loss of ERβ-mediated repression of inflammation plays a critical role in the development of PD. Currently, we are working on testing our hypothesis using the LPS-induced PD mouse model in order to understand the mechanistic correlation between ERβ, inflammation and PD.

AD is the most common age-dependent neurodegenerative disease and its major symptoms include progressive loss of memory and cognitive impairment. Several genes are identified as being responsible for familial AD, however, the majority of cases are sporadic, suggesting that environmental factors play essential roles in AD pathogenesis. In particular, aging and diet may be critical environmental factors for inducing AD pathology. As women get older, the age-dependent reduction of estrogens during menopause may decrease the ligand-dependent recruitment of corepressors to ERs, resulting in increased susceptibility to neuroinflammation and development of AD. Type 2 diabetes mellitus (T2DM) has also been shown to significantly increase the risk of AD, suggesting that diet is an important factor for AD pathogenesis. T2DM is characterized by insulin insensitivity and is triggered by pro-inflammatory macrophages migrating into adipose tissue. However, the mechanisms underlying how T2DM increases the risk of AD are not understood. Since a high fat diet is sufficient to induce brain inflammation and macrophages express ERα, we are using mouse models to test whether systemic administration of various endogenous estrogens can repress macrophage-dependent inflammation and improve insulin sensitivity, resulting in decreased brain inflammation and prevention or amelioration of AD symptoms.

Estrogen levels and an increased risk of MDD are closely correlated. For example, women during pregnancy, delivery, nursing (maternity blues) and post-menopause are at high risk for developing MDD, suggesting the importance of estrogen-mediated regulation. Recent GWAS results suggest that genes regulating immune responses, synaptic function and histone methylation are mutated in patients with adult psychiatric diseases. Since pro-inflammatory cytokines are sufficient to induce depression in animal models, we are testing the hypothesis that inflammation and changes in the levels of sex hormones influence microglial functions in the adult brain, leading to malfunctions in neurons and depressive behavior. 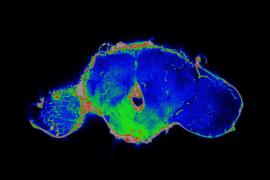 The experience of a fruit fly dying from cancer may seem worlds away from that of a human with a life-threatening tumor, yet University of California, Berkeley, researchers are finding commonalities between the two that could lead to ways to prolong the lives of cancer patients.

The experience of a fruit fly dying from cancer may seem worlds away from that of a human with a life-threatening tumor, yet University of California, Berkeley, researchers are finding commonalities between the two that could lead to ways to prolong the lives of cancer patients.
Loading Class list ...
.