Judith Butler is Distinguished Professor in the Graduate School and formerly the Maxine Elliot Chair in the Department of Comparative Literature and the Program of Critical Theory at the University of California, Berkeley. They received their Ph.D. in Philosophy from Yale University in 1984. They are the author of several books:  Subjects of Desire: Hegelian Reflections in Twentieth-Century France (1987), Gender Trouble: Feminism and the Subversion of Identity (1990), Bodies That Matter: On the Discursive Limits of “Sex” (1993), The Psychic Life of Power: Theories of Subjection (1997), Excitable Speech (1997), Antigone’s Claim: Kinship Between Life and Death (2000), Precarious Life: Powers of Violence and Mourning (2004); Undoing Gender (2004), Who Sings the Nation-State?: Language, Politics, Belonging (with Gayatri Chakravorty Spivak in 2008), Frames of War: When Is Life Grievable? (2009), Is Critique Secular? (co-written with Talal Asad, Wendy Brown, and Saba Mahmood, 2009), Sois Mon Corps (2011), co-authored with Catherine Malabou, Parting Ways: Jewishness and the Critique of Zionism (2012), Dispossession: The Performative in the Political  (co-authored with Athena Athanasiou 2013), Senses of the Subject and Notes Toward a Performative Theory of Assembly (2015), and a co-edited volume, Vulnerability in Resistance, with Duke University Press (2015), The Force of Nonviolence 2020, and What World is This? A Pandemic Phenomenology (2022).  Their books have been translated into more than twenty-seven languages.

They served as a founding director, with Martin Jay, of the Critical Theory Program at UC Berkeley. They received a Mellon Foundation grant to found and developed the International Consortium of Critical Theory Programs (2016-2020) where they serve now as Co-Chair of the Board and editorial member of Critical Times. Earlier, they served as Department Chair of the Department of Rhetoric in 1998-2003 and 2006-7, and the Acting Chair of the Department of Gender and Women’s Studies, 2002-3. They also served as the Chair of the Board of the University of California Humanities Research Center in Irvine. They were elected member of the Executive Council of the Modern Languages Association and chaired its committee on Committee on Academic Freedom and Professional Responsibilities before serving as President of the organization in 2020.  They are also affiliated faculty with the Psychosocial MA Program at Birkbeck College University of London and teaches as the  Hannah Arendt Chair at the European Graduate School in Sass Fee, Switzerland.  They have taught as a Distinguished Visiting Professor in Philosophy at the New School University in 2020-2022. They will be the intellectual in residence at the Centre Pompidou in Paris in 2024.

Butler has been active in several human rights organizations, including the Center for Constitutional Rights in New York and the advisory board of Jewish Voice for Peace. They were the recipient of the Andrew Mellon Award for Distinguished Academic Achievement in the Humanities (2009-13) and received the Adorno Prize from the City of Frankfurt (2012) in honor of their contributions to feminist and moral philosophy, the Brudner Prize from Yale University for lifetime achievement in gay and lesbian studies, and was named the Albertus Magnus Professorship from the City of Cologne, Germany in 2016. They are the past recipient of several fellowships including Guggenheim, Rockefeller, Ford, American Council of Learned Societies, and was Fellow at the Institute for Advanced Study at Princeton and at Ecole Normale Superieure in Paris. They have given the Wellek Lectures at Irvine, the Carpenter Lectures at the University of Chicago, the Watts Lecture at the Nobel Museum in Stockholm, the Gauss Lectures at Princeton, the Messenger Lectures at Cornell, the Tanner Lectures at Yale University, and the annual Freud Lecture at the Freud Museum in Vienna.  They have received 14  honorary degrees: Université Bordeaux-III, Université Paris-VII, Grinnell College, McGill University, University of St. Andrews, Université de Fribourg in Switzerland, Universidad de Buenos Aires, Liège Université, the Universidad de Costa Rica, Universidad de Guadalajara, Universidad de Chile, University of Belgrade, Universidad Veracruzana, and the Autonomous University of Mexico and appointed an Honorary fellow at Birkbeck University of London. In 2014, they were awarded the diploma of Chevalier of the Order of Arts and Letters from the French Cultural Ministry and subsequently reappointed as Commandant. They served as well on the Advisory Committee of the Institute fuer Sozialforschung in Frankfurt.   In 2015, they were made an “honorary geographer” by the American Association of Geographers and was elected as a corresponding fellow of the British Academy.  They were also elected as member of the American Philosophical Society and  elected to the American Academy of Arts and Sciences in 2019. In 2022, they received the Catalonia International Prize from the canton of Catalunya and the gold medal from the Circulo de Bellas Artes in Madrid. 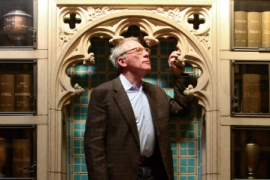 Thomas Laqueur studies the role of cemeteries in civilization. 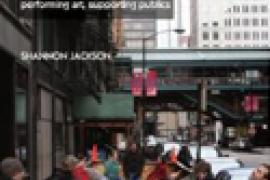 No artist is an island, says faculty author Shannon Jackson

Art that looks directly at the institutions that, for better or for worse, surround and support our lives is the subject of a new book, “Social Works: Performing Art, Supporting Publics,” by Shannon Jackson, professor of Theater, Dance and Performance Studies

Thomas Laqueur studies the role of cemeteries in civilization.

No artist is an island, says faculty author Shannon Jackson

Art that looks directly at the institutions that, for better or for worse, surround and support our lives is the subject of a new book, “Social Works: Performing Art, Supporting Publics,” by Shannon Jackson, professor of Theater, Dance and Performance Studies

Please note: The views and opinions expressed in these articles are those of the authors and do not necessarily reflect the official policy or positions of UC Berkeley.
April 30, 2020

Judith Butler: Mourning Is a Political Act Amid the Pandemic and Its Disparities

Truthout
George Yancy
This is the stunning cruelty of the U.S. that shocks large portions of the world. Many workers are not just temporarily out of work, but are registering the collapse of their work worlds, the prospect of no paycheck, homelessness, a pervasive sense of being abandoned by the society to which they should rightly belong, says comparative literature and critical theory professor Judith Butler in an interview about the personal and political implications of vulnerability and mourning amid the COVID-19 pandemic. Speaking of vulnerability, she says: "Humans share the air with one another and with animals; they share the surfaces of the world. ... These reciprocal and material modes of sharing describe a crucial dimension of our vulnerability, intertwinements and interdependence of our embodied social life. ... On the other hand, the public response to the pandemic has been to identify 'vulnerable groups' -- those who are especially likely to suffer the virus as a ravaging and life-threatening disease and to contrast them with those who are less at risk of losing their lives from the pathogen. The vulnerable include Black and Brown communities deprived of adequate health care throughout their lifetimes and the history of this nation. The vulnerable also include poor people, migrants, incarcerated people, people with disabilities, trans and queer people who struggle to achieve rights to health care, and all those with prior illnesses and enduring medical conditions. ... For those who are homeless or unemployed, the economic forecast could not look bleaker. Without a working and equitable health care system, the affirmation of health care as a public good and a mandate of government, the unemployed are left to scramble for alternatives to avoid falling ill and dying for lack of care." About mourning, she says: "Learning to mourn mass death means marking the loss of someone whose name you do not know, whose language you may not speak, who lives at an unbridgeable distance from where you live. One does not have to know the person lost to affirm that this was a life. What one grieves is the life cut short, the life that should have had a chance to live more, the value that person has carried now in the lives of others, the wound that permanently transforms those who live on. What someone else suffers is not one's own suffering, but the loss that the stranger endures traverses the personal loss one feels, potentially connecting strangers in grief."
FullStory

New York Times
Alexis Soloski
Comparative literature and critical theory professor Judith Butler's has taken a leap onstage at New York Live Arts, playing a comparative literature professor like herself in an experimental performance called "Fragments, Lists & Lacunae." Describing the role, this critic writes: "Over the course of the semester, in a series of punchy, truncated lectures, the professor hips her undergrads to the idea that 'absences are more than merely meaningful; rather, they are the material that governs that which is present.' Her examples include doughnut holes, the Nixon tapes, Sappho. Pay attention. This is going on the final."
FullStory (*requires registration)