Professor Lee is a theoretical condensed matter physicist. The principal goal of his research is to develop the theory for topological phase transitions and to understand the mechanism of high-temperature superconductivity. More generally he is interested in new organization principles enabling microscopic degrees of freedom to behave cooperatively in a fundamentally new manner. His research is in the arena of strong-correlated many-body physics.

The following are some specific examples of Professor Lee’s research.

High-temperature superconductivity. Elevating the transition temperature of superconductors to near room temperature so that applications are practical is one of the most important challenges in science. In the last thirty years, two families of superconductors which superconduct at relatively high temperature under ambient pressure have been discovered. These are the copper-oxide and iron-based superconductors. Professor Lee's primary interest is to understand the mechanism by which strong Cooper pairing occurs in these materials. For example, in the arena of iron-based superconductivity, the highest critical temperature is realized at the interface between a single atomic layer of FeSe and bulk SrTiO3. Professor Lee's research group discovered that the reason for high Tc is a cooperative pairing mechanism caused by the electron-electron interaction in FeSe and the across-interface electron-phonon interaction.

Strongly interacting Fermi gas in two dimensions. A new state of matter forms when two-dimensional electron gas is submitted to strong magnetic fields. This new state, the quantum Hall liquid, is an incompressible quantum fluid. It has soliton-like excitations that carry fractional electron charge, and obey quantum statistics between that of fermions and bosons. In the absence of magnetic field, weakly interacting Fermi gas always insulates. Due to recent experimental discovery, it is possible that strongly interacting electron gas has a non-Fermi liquid metallic state. Whether such a state exists is the question this research intends to answer.

In general Professor Lee is interested in new organization principles which explain the novel and unexpected collective behaviors of microscopic degrees of freedom. The exotic quantum states that fit this description include spin liquid and other "intrinsically" topological ordered states. Strange metal and other topological ordered gapless state. Topological insulator and superconductors, etc. 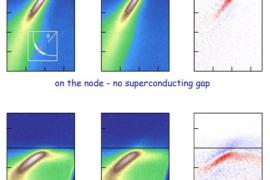 A new tool to attack the mysteries of high-temperature superconductivity

A new tool to attack the mysteries of high-temperature superconductivity