I have been involved in anthropological research concerned with long-term human-plant relationships since 1979. Concentrating in archaeology, I have focused primarily on long-term plant-human interactions in the South American region, although I have also worked in Turkey. I primarily study highland Andean societies, especially later prehistory with the pre-Inka and the Inka political world. Since 1992, I have been directing a project on the shores of Lake Titicaca, Bolivia where we investigate early settled life at a series of sites creating a regional perspective. The research team is interested in the domestic daily world of the residents, but also of their ritual and social worlds. The detailed data rich field orientation requires us to study closely the discrete details of daily life registered in the artifacts. The Taraco Archaeological Projec is investigating a series of sites that span the Formative periods 1500 BC - AD 300, investigating the rise of regional identities. Between 1996 and 2001 I was involved in research at the Neolithic village site of Çatal Höyük, where I headed the archaeological macro-botanical research.

My laboratory expertise is what is called either paleoethnobotany or archaeobotany--the study of plants used by humans in the past. I currently direct the UCB McCown Archaeobotany Laboratory where a series of analytical projects are ongoing. Students working with me have a chance to immediately join in on current laboratory and field projects. I regularly take on both undergraduates and graduates in both types of research. While my main work has been with macroremains, we are now beginning to include phytolith and starch analysis, in addition to documenting internal cellular morphology identification. The types of projects I am currently involved in range from social theory of past human social life, foodways, to methodology that leads us to a better understanding of past plant use. I have written on agricultural production, cooking practices and what shifts in these suggest about social relations, gender relations surrounding plant use, the rise of complex society, political change and the symbolic use of plants in the legitimation of authority, fuel use and symbolism, and the origins of plant domestication as social identity. Furthermore, I have written a series of pieces on paleoethnobotanical methods. I am particularly interested in wild taxa use as compared to domesticates and the stages in plant processing in terms of other social realms, especially symbolic and political, in addition to the playing out of the concept of culture in a natural world. I am currently writing a book on the the study of food ways in the past, in a book titled: Past Repasts, the archaeology of food. 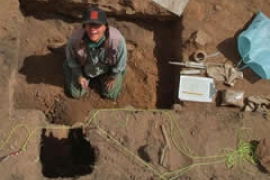 A Taste of Andean History

Of all of the advances people have developed over the millennia, food plants may be the most important. By examining the plant remains on early settlements, Berkeley professor of anthropology Christine Hastorf pieces together how ancient peoples worked, ate, traded and worshiped.

A Taste of Andean History
See all

A Taste of Andean History

Of all of the advances people have developed over the millennia, food plants may be the most important. By examining the plant remains on early settlements, Berkeley professor of anthropology Christine Hastorf pieces together how ancient peoples worked, ate, traded and worshiped.