Charles Marshall is broadly interested in how paleontology can inform our understanding of the history of life, and the processes that control it.  His research often takes advantage of data from genomics, molecular phylogenies, developmental biology, and functional studies.  Much of his work also involves the development of new tools or ways of knowing.  Current projects in his group center on: understanding how biodiversity changes on geologic timescales, and on how molecular phylogenetic data and the fossil record might be used synergistically to understand the processes responsible for changes in diversity; the calibration of molecular clocks; and, the import of new genomic data on our understanding of the Cambrian explosion. 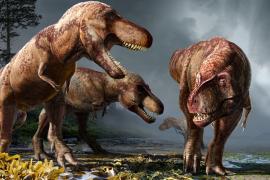 How many T. rexes were there? Billions.

How many Tyrannosaurus rexes roamed North America during the Cretaceous period? That’s a question Charles Marshall pestered his paleontologist colleagues with for years until he finally teamed up with his students to find an answer.

How many T. rexes were there? Billions.
See all

How many T. rexes were there? Billions.

How many Tyrannosaurus rexes roamed North America during the Cretaceous period? That’s a question Charles Marshall pestered his paleontologist colleagues with for years until he finally teamed up with his students to find an answer.

Please note: The views and opinions expressed in these articles are those of the authors and do not necessarily reflect the official policy or positions of UC Berkeley.
April 16, 2021

How Many Tyrannosaurus Rexes Ever Lived on Earth? Here's a New Clue.

The New York Times
Kenneth Chang
Researchers have calculated that approximately 20,000 Tyrannosaurus Rex adults lived at any one time in North America. Charles R. Marshall, a professor of integrative biology at the University of California, Berkeley who led the research, said the work started with him wondering, when he held a T. rex fossil, how rare was that? "Were there are a million, a billion, a trillion T. rexes?" he said. "Is this one in a million, one in a billion, one in a trillion? How on earth could we know that number? We all know fossils are rare, but how rare are they? And so it really started with that question." For more on this, see our press release at Berkeley News. Stories on this topic have appeared in dozens of sources, including the Associated Press, CNN, The Guardian, USA Today, The Mercury News, LiveScience, JumpRadio, Taipei Times, Forbes, Voice of America, and The New York Post.
FullStory (*requires registration)