Our research addresses basic aspects of chromosome dynamics and developmental biology: how chromosomes fold and align to achieve proper segregation; how gene expression is coordinately regulated across the entire X chromosome; how choices are made between alternative cell fates; how regulatory gene hierarchies specify sexual fate. Our studies of X-chromosome-wide gene expression through the process of dosage compensation have revealed a mechanistic link between higher-order chromatin structure and chromosome segregation during meiosis and mitosis. These studies have led to an analysis of chromosome structure and crossover control during meiosis and macromolecular structures called kinetochores that attach and move chromosomes within the spindle during chromosome segregation.

Counting X chromosomes and autosomes to determine sex. In numerous organisms, the decision to become male or female is made by an X-chromosome counting mechanism that reliably distinguishes one X chromosome from two. We have used the model organism Caenorhabditis elegans to dissect such a precise chromosome counting mechanism in molecular detail. In this nematode, the two-fold difference in X-chromosome dose between males (XO) and hermaphrodites (XX) is translated into the non-linear response of the target gene xol-1 (XO lethal), a switch that specifies male fate when active and hermaphrodite fate when inactive. Setting xol-1 expression is essential for viability as well as sex determination because xol-1 also controls X-chromosome dosage compensation. Five X-linked genes called X-signal elements communicate X-chromosome dose by controlling the activity of xol-1, using a combination of at least two mechanisms. One involves transcriptional repression of xol-1 in XX embryos and requires an X-signal element that encodes a nuclear hormone receptor. A second involves the post-transcriptional regulation of xol-1 and requires an X-signal element that encodes an RNA binding protein. This protein represses xol-1 by preventing the RNA processing event that generates the functional xol-1 transcript. Both the transcriptional and RNA processing mechanisms of repression act together to ensure the fidelity of the X-chromosome counting process. Sex is not determined simply by X-chromosome number, but rather by the ratio of X chromosomes to sets of autosomes. We have shown that the autosomal signal is composed of autosomal signal element genes, one of which encodes a T-box class of transcription factors and the other encodes a protein with glutamine and asparagine-rich repeats, zinc fingers, and a metalloprotease domain. How these autosomal signals are integrated and functionally oppose the X signals to regulate sexual fate is a focus of future studies. Efforts are also directed toward defining other X and autosomal signal element genes.

Targeting the Dosage Compensation Complex to X Chromosomes. The dosage compensation complex (DCC) is recruited to X chromosomes by two hermaphrodite-specific genes (sdc-2 and sdc-3) that coordinately control both sex determination and dosage compensation. SDC-2 is central to X-chromosome recognition and confers both X-chromosome specificity and hermaphrodite-specificity to dosage compensation. The biochemistry underlying the function of SDC-2 is currently under investigation. While many components of the DCC have been identified, the cis-acting chromosomal elements that distinguish X chromosomes from autosomes to recruit the complex have been elusive until recently. To define these X-recognition elements (rex sites), we performed an X-chromosome-wide screen to identify regions of X sufficient to recruit the complex when detached from X. We found non-overlapping X regions that strongly recruit the DCC in vivo and other X regions that recruit the complex weakly or not at all, despite having genes know to be dosage compensated on the native X. The DCC normally binds the entire length of the wild-type X chromosome, including regions unable to recruit the complex when detached from X. Thus in worms, as in mammals, the DCC spreads into regions distant from initial recruitment sites. We have identified nine discrete X-recognition elements, and shown that nematodes use these cis-acting sites to recruit the DCC and nucleate spreading to neighboring stretches of X lacking recognition elements. This recruitment and spreading establishes the global, epigenetic regulation of X chromosomes that is maintained throughout the lifetime of the animal. Current projects define more precisely the mechanism of DCC spreading and the sequence or structure of rex sites responsible for differentiating X chromosomes from autosomes to recruit the DCC. 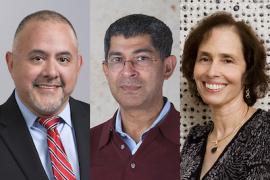 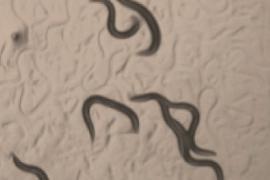 Genetic switch could be key to increased health and lifespan

Newly discovered genetic switches that increase lifespan and boost fitness in worms are also linked to increased lifespan in mammals, offering hope that drugs to flip these switches could improve human metabolic function and increase longevity.

Genetic switch could be key to increased health and lifespan

Newly discovered genetic switches that increase lifespan and boost fitness in worms are also linked to increased lifespan in mammals, offering hope that drugs to flip these switches could improve human metabolic function and increase longevity.

Please note: The views and opinions expressed in these articles are those of the authors and do not necessarily reflect the official policy or positions of UC Berkeley.
January 22, 2020

The Scientist
Diana Kwon
Molecular and cell biology professor Barbara Meyer is profiled for her pioneering research on genetic switches, which can determine such things as sex in the early development of an organism. In addition to her research, the profile describes her journey -- through education -- away from her childhood hometown of Stockton, where "there was no model for being a scientist ... certainly not for a girl," to Stanford and Berkeley, and her marital and research partnership with molecular and cell biology professor emeritus Thomas Cline. Among her future research interests is the unraveling of biochemical mechanisms underlying dosage compensation and gaining an understanding of how chromosome structure affects gene expression. "There are quite a number of big questions left," she says.
FullStory