Over the course of US history, there have been and continue to be vast inequalities in terms of race and social class. Arianne Eason's research examines how features of our social and cultural context shape peoples’ attitudes and behavior in ways that work to reify existing inequalities and stagnate change.  Her work aims to shed light on: 1) how we think about and behave towards diverse others within a complex society riddled with inequality; and 2) how we facilitate positive change. Towards these aims, her research draws broadly on developmental, social, and cultural psychology to examine three processes, which I describe in more detail below: 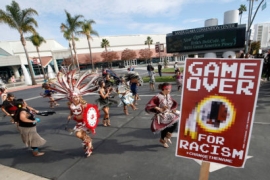 Contrary to polls showing that relatively few Native Americans take offense at the Washington Redskins’ name, a new UC Berkeley study has found that at least half of more than 1,000 Native Americans surveyed are offended by the football team’s 87-year-old moniker and Native mascots in general.

Contrary to polls showing that relatively few Native Americans take offense at the Washington Redskins’ name, a new UC Berkeley study has found that at least half of more than 1,000 Native Americans surveyed are offended by the football team’s 87-year-old moniker and Native mascots in general.

Please note: The views and opinions expressed in these articles are those of the authors and do not necessarily reflect the official policy or positions of UC Berkeley.
February 5, 2020

NBC Sports
Mike Florio
Native Americans take more offense at sports teams' appropriation of tribal names and imagery than previous polls have suggested, according to a soon-to-be-published survey led by assistant psychology professor Arianne Eason. Polling more than 1,000 Native Americans, the researchers found that 57 percent of respondents who "strongly identify with being Native American" and 67 percent of those "who frequently engage in tribal cultural practices" are "deeply insulted by caricatures of Native American culture." Speaking of the Washington Redskins team, and ongoing efforts by native groups to get its name changed, this columnist writes: "What number of genuinely offended Native Americans is acceptable? ... The reality, no matter how many fans of the team get angry at me for declining to use the term, is this: Only one NFL team has a name that is recognized as a racial slur. And, inexplicably, the NFL is fine with that. ... At some point in the hopefully-not-too-distant future, history will regard this dynamic with the same incredulity that it regards other examples of blatantly racist conduct that, through the passage of time and thanks to right-minded men and women of goodwill, was eventually regarded as wrong and, in turn, abandoned." For more on this, see our press release at Berkeley News. Stories on this topic have appeared in more than a dozen sources, including Indian Country Today, the Washington Times, WTOP, Yahoo! Sports, Maryland Patch, Mirage News, and DCist.
FullStory