Yildiz laboratory combines molecular biology and biophysical techniques to understand mechanisms that underlie the cellular organization and motility. Single molecule imaging enables direct observation of molecular motions, time courses of reactions and heterogeneity in subpopulations of the proteins. One major focus is to understand how microtubule motors work individually and how their interaction play a key role in intracellular transport and organismal motility. We are also using superresolution imaging techniques to visualize high order structures of telomeric DNA in human cells.

The Mechanism of Dynein Motility: Cytoplasmic dynein is a AAA motor that transports a variety of intracellular cargo towards the microtubule minus-end in eukaryotic cells. Compared to other cytoskeletal motors (kinesin and myosin), the mechanism of dynein motility is significantly less understood due to its large size and complexity.  We showed that dynein motility differs significantly from kinesin and myosin in many aspects. By using single molecule fluorescence and optical trapping methods, we aim to dissect the detailed mechanism of dynein processivity, directionality and force production.

Intraflagellar Transport (IFT): We use Chlamydomonas model system to study the regulation of bidirectional cargo transport. Cilia and flagella power cell locomotion and mediate cell signaling in eukaryotes. Their assembly and maintenance require IFT between the flagellar membrane and axonemes. By using a combination of optical trap, multicolor fluorescence and FRAP microscopy, we showed that kinesin and dynein motors are coordinated in IFT such that only one type of motor remains active at a time. Chlamydomonas IFT is an excellent model system to study how motor protein activity is reciprocally coordinated to avoid tug-of-war in cargo transport. We aim to perform advanced microscopy assays in flagellar turnaround zones and reveal by which mechanism the cell turns the motors on and off. We also showed that IFT is responsible for gliding of the entire cell over a glass substrate. Gliding motility is central to understanding the function and evolution of cilia, as it might exist in early cilia before the establishment of axonemal beating. We aim to study how IFT dynamically turns over flagellar membrane proteins and facilitates mating between opposite gamete types. These studies will have broad implications for the traffic of signaling proteins within the ciliary membrane.

Maintenance and Protection of Mammalian Telomeres: Human telomeres consist of 2,000-30,000 base pairs of double-stranded TTAGGG repeats and terminate with a 50-200 nucleotide (nt) long single stranded 3’ G-overhang. The single-stranded telomeric DNA (ssTEL) is prone to enzymatic attack by exonucleases and DNA repair. We investigate how shelterin facilitates the protection of human telomeres both in vitro and in vivo. G-overhangs spontaneously fold into G-quadruplexes which also affect the competition between shelterin components and DNA repair proteins. We are also developing a single molecule assay to monitor telomerase activity in real time and study the interactions between shelterin, DNA structure and telomerase activity in model telomeric DNA. Telomere biology is central to human aging and cancer, and dissecting the mechanism of telomere protection and telomerase-based telomere elongation at a single molecule level will significantly advance the field. 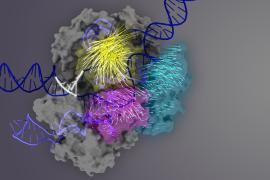 Further steps made toward a hyper-accurate gene editor.

President Obama named 102 researchers as recipients of the Presidential Early Career Awards for Scientists and Engineers, the highest honor bestowed by the United States Government on science and engineering professionals in the early stages of their independent research careers.

Further steps made toward a hyper-accurate gene editor.

President Obama named 102 researchers as recipients of the Presidential Early Career Awards for Scientists and Engineers, the highest honor bestowed by the United States Government on science and engineering professionals in the early stages of their independent research careers.