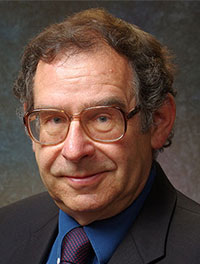 Dr. Martin is Professor Emeritus of Cell and Developmental Biology, and most recently served as dean of the Biological Sciences Division in the College of Letters and Science from 2011 to 2016. In his role as dean, Steve maintained the division’s research excellence, supervised the recruitment of twenty-five new faculty members, and oversaw the successful retention of twelve others. The departments that comprise the Biological Sciences Division — Molecular & Cell Biology and Integrative Biology — continue to receive high rankings and attract outstanding students and faculty.

Throughout his tenure as dean, Steve also supported the creation of and fundraising for a number of major research and educational initiatives including the Innovative Genomics Initiative, the Immunotherapeutics and Vaccine Research Initiative, and the Berkeley BRAIN Initiative. He also raised funds to support the Biology Scholars Program — one of the nation’s most successful STEM diversity programs — and secured the establishment of three new endowed chairs. As dean, Steve was heavily involved in the transition to, and ongoing relationship with, Campus Shared Services, and he will bring to this interim role an on-the-ground understanding of research administration as well as demonstrated success in fostering faculty-led interdisciplinary research programs.

His major contributions stem from his initial identification, in 1970, of the transforming gene of Rous sarcoma virus, which causes a type of cancer in chickens. This viral gene was subsequently named v-src, and found to be derived from a cellular gene, called c-src. Many human breast and colon cancers display elevated levels of the Src protein, and Src plays a variety of roles at different stages of tumor progression. Martin’s work has primarily concerned with the identification of the signaling proteins and pathways that mediate the effects of Src on cell proliferation and motility. This work has shed light on the role of Src activation in the growth and invasiveness of human cancer cells.

Appointed in August 2017, Dr. Martin will serve through December 2017, while the University conducts an internal search for the next Vice Chancellor for Research.