The recipients of the 2017/18 UC Berkeley-UCSF Sackler Faculty Exchange Program are Dr. James Fraser from UCSF and Dr. Carlos Bustamante from UC Berkeley. 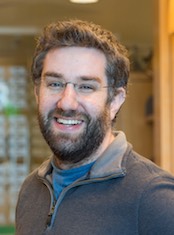 Mutations in proteins can exhibit non-additivity (epistasis). For example, mutation X can be deleterious in one background, yet neutral or beneficial when combined with mutation Y. An extreme example of this non-additivity is the case of “compensated pathogenic deviations” where mutations that are causal of disease in humans are tolerated as the wild type residue in other species. Using bioinformatics methods and in vivo selections we have identified compensatory mutations in the metabolic enzyme glutamine synthetase. Our working hypothesis is the disease mutations bias the conformational ensemble of the enzyme towards a non-functional oligomeric filament and that the compensatory mutations restore the enzyme towards the non-filamentous state.

James Fraser is an assistant professor in the Department of Chemistry at UC Berkeley and a Faculty Scientist at the Lawrence Berkeley National Laboratory. His group uses insights from cellular biophysics, physical chemistry, and materials science to study key aspects of signal transduction processes in cell membranes. 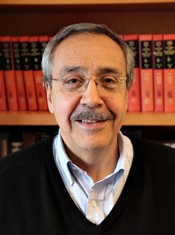 The compaction of eukaryotic DNA into chromatin enables both the accommodation of a large amount DNA into a constrained nuclear space as well as regulation of DNA based transactions such as transcription and replication. Thus regions of the genome with highly compacted chromatin structures are silenced for expression, whereas those with relaxed open structures correspond to actively expressed genes. The basic repeating unit of chromatin is a nucleosome, which contains ~147 bp of DNA wrapped around an octamer of histone proteins. How chromatin adopts and retains specific compacted three-dimensional (3D) structures has received substantial attention for several decades. Yet, there is a lack of consensus about the factors that govern chromatin compaction and the underlying molecular mechanisms. The Bustamante and Narlikar laboratories, propose to use high speed atomic force microscopy (HS-AFM) to follow in real-time the transition of chromatin primary structures into compacted 3D ones. In preliminary experiments, nucleosomal arrays provided by Narlikar lab have been visualized at high spatial (1-2 nm) and temporal resolution (up to 100 msec per frame) in solution in the Bustamante lab. In this proposal we aim at expanding these studies by directly visualizing the effects of different ions and protein regulators on the dynamics of chromatin folding and on the resultant 3D chromatin structures. The simultaneous temporal and spatial resolution provided by the HS-AFM will yield unprecedented insight into the process by which chromatin attains its higher order organization.