Kavli Center for Ethics, Science, and the Public

The mission of the Kavli Center for Ethics, Science, and the Public at Berkeley is to provide an inclusive, democratic, and multidisciplinary framework for understanding the ethical implications of science and technology, guiding the development of policy concerning anticipated and actual scientific advances, and helping to ensure that they are answerable to fundamental human interests.

Three major research questions inform the work of the Center:

The Kavli Center vision comprises three elements: a “hub”, representing the core activities of the Center, where all who are affiliated with it come together to address fundamental ethical questions across disciplinary boundaries; “spokes” linking these activities to various scientific disciplines; and an “axle” connecting the Center with the larger society in a two-way process of outreach and engagement. The Center is an intellectual community, with cohorts of faculty and students exposed to and participating in all three elements. 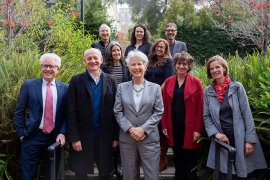 UC Berkeley announced that the campus will be home to a new Kavli Center for Ethics, Science, and the Public, which, alongside a second center at the University of Cambridge in the United Kingdom, will connect scientists, ethicists, social scientists, science communicators and the public in necessary and intentional discussions about the potential impacts of scientific discoveries.