Taeku Lee is Professor of Political Science and Law and Chair of the Travers Department of Political Science at the University of California, Berkeley. His first book, Mobilizing Public Opinion (Chicago 2002), received the J. David Greenstone and the V.O. Key book awards. He also co-authored Why Americans Don't Join the Party (Princeton 2011), co-authored Asian American Political Participation (Russell Sage 2011), co-edited Transforming Politics, Transforming America (Virginia 2006), co-edited Accountability through Public Opinion (World Bank, 2011), and is completing the Oxford Handbook of Racial and Ethnic Politics in the United States. Lee has served in administrative and leadership positions at UC-Berkeley and in advisory and consultative capacities for academic presses and journals, non-governmental organizations, research projects, think tanks, and multinational corporations. Prior to coming to Berkeley, he was Assistant Professor of Public Policy at Harvard's Kennedy School and Robert Wood Johnson Scholar at Yale. Lee was born in South Korea, grew up in rural Malaysia, Manhattan, and suburban Detroit, and is a proud graduate of K-12 public schools, the University of Michigan (A.B.), Harvard University (M.P.P.), and the University of Chicago (Ph.D.). 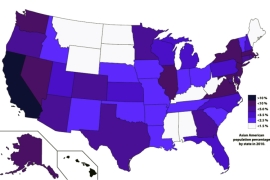 Political scientist Taeku Lee is part of a team leading a newly announced, expanded study of the experiences and attitudes of Asian Americans in the most extensive look to date at the nation’s fastest-growing racial group.

Political scientist Taeku Lee is part of a team leading a newly announced, expanded study of the experiences and attitudes of Asian Americans in the most extensive look to date at the nation’s fastest-growing racial group.

Please note: The views and opinions expressed in these articles are those of the authors and do not necessarily reflect the official policy or positions of UC Berkeley.
September 18, 2019

The Spike in Political Mobilization of Women of Color in the U.S. Will Define 2020

Forbes
Bonnie Chiu
A new study of the 2018 Midterm elections, led by political science and law professor Taeku Lee for the Asian American and Pacific Islander (AAPI) Civic Engagement Fund and Groundswell Fund, documents unprecedented participation by women of color that year. "When you look at turnout as a percentage of the citizen voting age population in previous midterms, the numbers for 2006, 2010, 2014 were 39%, 39%, and 35%, respectively. In 2018, the figure was 48%," Professor Lee says. This represents a 37% increase among women of color voters compared to 2016, while other groups have not shown similar hikes. "In 2018, voters were overwhelmingly angry because of Trump," he adds. "Emotions are powerful motivators in turnout."
FullStory

Trump could be turning Asian Americans into reliable Democratic voters

Vox
Li Zhou
Between the 2014 and 2018 midterm elections, the share of Asian American voters backing Democratic House candidates grew from 49 percent to a whopping 77 percent, and a paper co-authored by political science and law professor Taeku Lee attributed the trend to the Republican Party "pushing" voters away with anti-immigration rhetoric, while the Democratic Party was "pulling" them in with more inclusive policies and increased representation in legislatures. As the paper's co-author, Karthick Ramakrishnan of UC Riverside, says: "It's really difficult to be a moderate Republican these days especially on issues like immigration.  We have seen evidence of a firming up of party identification of voters over time.  What we saw in 2016 and 2018 is what we call a crystallization of partisanship among Asian American Democrats."
FullStory