Research on new theory that cancers are species of their own.

Over a hundred years of research have shown that all cancers are autonomous, have individual karyotypes and arise only years to decades after initiation by carcinogens.  But despite enormous efforts since, explanations for these long-established characteristics are still debated.

Since the mutation theory continues to elude formal proof, we have recently advanced and tested an alternative cancer theory. This theory holds that carcinogenesis is a form of speciation 1,2.  Four analogies between cancers and conventional species support this theory:  1) Cancers are autonomous growths, 2) have individual clonal karyotypes, 3) arise from precursors only after exceedingly long latencies of years to decades from carcinogens, which may be analogous to the long latencies from one conventional species to another and 4) are immortal.

Clonal heterogeneity.  According to the speciation theory the karyotypes of cancers arise from rare rearrangements of normal karyotypes.  By corrupting the normal balance of numerous normal genes, aneuploidy renders numerous cellular functions error-prone - above all mitosis - and thus destabilizes the karyotype.  But despite this inherent instability the karyotypes of cancers are steadily stabilized by clonal selections for autonomy – and are thus ‘heterogeneous’ within clonal margins.   The resulting heterogeneity would be proportional to the degree of aneuploidy.  This dynamic equilibrium between aneuploidy-catalyzed variation and concurrent selection for autonomy resolves the previously unexplained paradox of the “immortality” of cancers despite “genetic heterogeneity”. 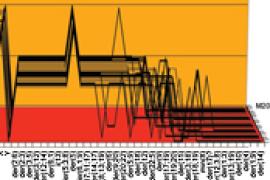 Molecular biologist Peter Duesberg’s theory that cancer results from chromosome disruption rather than a few gene mutations has led him to propose that cancers are actually evolving into autonomous species, akin to parasites.

Molecular biologist Peter Duesberg’s theory that cancer results from chromosome disruption rather than a few gene mutations has led him to propose that cancers are actually evolving into autonomous species, akin to parasites.