Julia Bryan-Wilson (Doris and Clarence Malo Professor of Modern and Contemporary Art) teaches art since 1945 in the US, Europe, and Latin America; she is also the Director of the UC Berkeley Arts Research Center. Her research interests include theories of artistic labor, feminist and queer theory, performance and dance, production/fabrication, craft histories, photography, video, visual culture of the nuclear age, and collaborative practices. She is the author of Art Workers: Radical Practice in the Vietnam War Era (University of California, 2009, named a best book of the year by the New York Times and Artforum); Art in the Making: Artists and Their Materials from the Studio to Crowdsourcing (with Glenn Adamson, Thames & Hudson, 2016); and Fray: Art and Textile Politics (University of Chicago, 2017, a New York Times best art book of the year and winner of the Frank Jewett Mather Award, the Robert Motherwell Book Award, and the Association for the Study of the Arts of the Present Book Prize).  She is the editor of OCTOBER Files: Robert Morris (MIT Press, 2013), and co-editor of three journal special issues ("Amateurism," Third Text, 2020; “Visual Activism,” Journal of Visual Culture, 2016; and “Time Zones: Durational Art in its Contexts,” Representations, 2016).  She is a 2019-20 Guggenheim Fellow.

Bryan-Wilson is an adjunct curator at the Museu de Arte de São Paulo, where in 2019 she co-curated the exhibit Women’s Histories. With Andrea Andersson, she curated Cecilia Vicuña: About to Happen, which opened at the Contemporary Arts Center New Orleans in 2017 and traveled to the Berkeley Art Museum, the Henry Art Gallery, the ICA Philadelphia, and MOCA North Miami. Her book about Louise Nevelson is forthcoming from Yale University Press.

Bryan-Wilson has published articles in Afterall, Art Bulletin, Art Journal, Artforum, Bookforum, Camera Obscura, differences, Grey Room, October, the Journal of Modern Craft, Oxford Art Journal, TDR: The Drama Review, and many other venues. Her article “Invisible Products” received the 2013 Art Journal Award. Many of her articles can be found at: https://arthistory.berkeley.edu/people/julia-bryan-wilson/.

Her research has been supported by grants and fellowships from the Center for Advanced Study in the Visual Arts at the National Gallery; the Center for Craft, Creativity, and Design; the Clark Art Institute; the Georgia O’Keeffe Museum Research Center; the Getty Research Institute; the Henry Moore Institute; the International Center for Writing and Translation; the Mellon Foundation; the National Endowment for the Humanities; the Smithsonian Archives of American Art; the Terra Foundation; and the Townsend Center for the Humanities, among others.  She was an inaugural recipient of the Creative Capital/Andy Warhol Foundation Arts Writers Grant, and has won several awards for her teaching and mentoring. She was the Terra Foundation Visiting Professor of American Art at the Courtauld Institute of Art in Spring 2014, and in 2018-19 she was the Robert Sterling Clark Visiting Professor at Williams College.

Bryan-Wilson is an affiliate of the Center for Latin American Studies, the Center for Race and Gender, the Designated Emphasis in Critical Theory, the Designated Emphasis in Gender, Women, and Sexuality, and the Graduate Group in Performance Studies. Before coming to UC Berkeley in fall 2011, she taught at the Rhode Island School of Design and at UC Irvine. 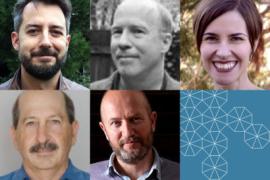 Please note: The views and opinions expressed in these articles are those of the authors and do not necessarily reflect the official policy or positions of UC Berkeley.
April 17, 2019