Bernard Sadoulet is first an instrumentalist, attempting to develop sophisticated detectors capable of answering some of the most fundamental scientific questions of the moment. This is how he designed the UA1 Central Detector, a critical element in the discovery of the W and the Z. In the last 10 years, his main effort has been to develop phonon mediated detectors working at milliKelvin temperatures. He believes such advanced detectors may be necessary for the detection of the weakly interacting massive particles which could form the ubiquitous dark matter in the universe. The dark matter problem is currently one of the most central puzzles of astrophysics and cosmology. There is a good chance, in his mind, that it can be solved in the coming decade by the complementary work of relatively small teams such as those involved in our Center for Particle Astrophysics.

More generally, he likes to work at the borders between several scientific disciplines, currently cosmology, particle physics and condensed matter. He is fascinated both by the new perspectives offered by such a multidisciplinary activities, and by the current rapid experimental progress, fueled in part by the technology transfer between these fields. At the same time, he likes to keep some involvement in the phenomenology motivating our effort, as he strongly objects to the prevalent separation between theorists and experimentalists. He regularly collaborate with theoreticians to attempt to identify the generic aspects of the models we are trying to test.

He also believes it is essential to better link such research activities to society. He thus strongly encourage members of my group to get engaged in outreach activities, whether it is sharing with the public at large our exciting quest, involvement in K-12 education, or collaboration with industry.

Search for Dark Matter. His current activities involve four aspects, each of which offers research opportunities for graduate students:

1) Development of advanced phonon-mediated detectors. Our current effort is focused on development of sensors for out-of-equilibrium phonons, using superconducting films and tunnel junctions.

2) The CDMS I experiment. We are currently installing at Stanford the first stage of our Cryogenic Dark Matter Search (CDMS), looking for Weakly Interacting Massive Particles (WIMPs). The coming months will be exciting as we will start counting with our novel detectors. We hope in the coming two years to improve the current sensitivity level by a factor of more than 50.

3) The CDMS II experiment at a deep site (probably at Soudan, Minnesota in collaboration with Fermilab). As we will soon be limited by the shallowness of the Stanford site, it is important to start preparation of a deep site experiment. We have already received funding for a duplicate cryogenic system.

4) Related phenomenological activities. I have recently collaborated with Griest, Kamionkowski and Jungman on various aspects of supersymmetric dark matter. I am open to the possibility of co-advising a graduate student with a theorist colleague. 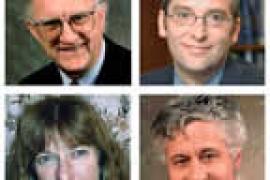 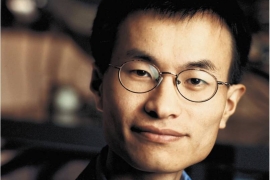 Four Lawrence Berkeley National Laboratory (Berkeley Lab) scientists have been elected to the 2012 class of the American Academy of Arts and Sciences, an honorary society founded in 1780 to recognize leading “thinkers and doers.”

Four Lawrence Berkeley National Laboratory (Berkeley Lab) scientists have been elected to the 2012 class of the American Academy of Arts and Sciences, an honorary society founded in 1780 to recognize leading “thinkers and doers.”